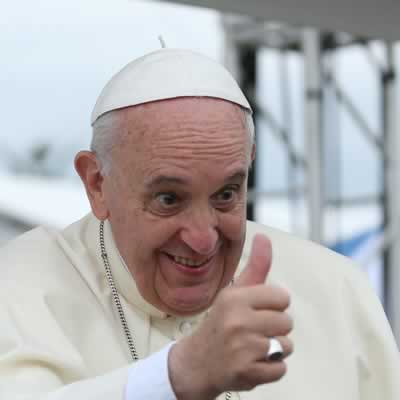 For decades now the world, and Americans in particular, have been experiencing a slow conditioning towards the acceptance of a one world government.  No where is the push greater than in the U.S. where American’s by nature are fighters.  And the Pope is here to help.

The United States was founded by people fighting against tyranny and fighting for the freedom to pursue what ever they desire, be it freedom of religion or any other pursuit, and that fighting nature has been in our blood since.  As a result the U.S. once led the world in technology and medicine among other advancements.  Advancements haven’t always been handled in an honorable or honest manner.  The ‘capture’ of Hitler’s weapons scientists and engineers in the waning days of WWII and relocating them to the U.S. to work on the atomic bomb and space program are two examples that come to mind.  This ‘pursuit’ of freedom was rather at the behest of an burgeoning empire rather than a free people desiring to create and dream without the shackles of tyranny.  Yet, Americans have enjoyed the freedom to create a better life, until recently.

Like the axiom about boiling a frog, gradually changing a situation results in not only very few people noticing, but virtually no resistance.  Over many decades freedom in the U.S. has been slowly taken away without the general public noticing.  However this slow erosion has reached a point where people have started to notice, and so they’ve had to increase the speed at which it is happening otherwise risk an organized revolt.  This erosion of freedoms is designed to bring us in line with other countries so that a one world government can be somewhat easily established.  You’ve heard U.S. Presidents gradually introduce the idea as a ‘New World Order’.

The recent financial upheavals all around the globe also serve this same purpose.  There simply cannot be a one world government without a one world currency.  Slowly all currencies will begin to fail and need to be replaced by something else that is embraced on a global scale.  It might not happen in the next 10 or 20 years, however there has been an alarming increase in the number of struggling and collapsing currencies over the past two years, so it may happen sooner than we expect.

So where does the Pope fit into this?  Well of course the transition into this one world control of everything would be much easier if the church (meaning the Roman Catholic Church) could convince it’s membership to go with the flow, right?  But is there something more sinister going on?

The Church that Jesus Christ established has been subject of many attempted coup throughout the centuries.  While on the surface it may appear to be political or religious in nature, but it’s always been satan at the helm.  The establishment of the Roman Catholic Church has been the single greatest near success.  Should that organization ever completely absorb all forms of organized churches and beliefs in the world the coup would be a 99% success.  It can never reach 100% as Christ proclaimed the gates of hell would never overcome His Church.  However the attempt still continues.

The latest step toward this appeared in January 2016 as the pontiff released this video message calling for all believers and beliefs to accept one another and embrace one another as brothers and sisters because we all find GOD and will meet him through our many different paths.  This of course is a heresy, a bold, flat out lie that directly contradicts what Jesus taught.

And there is salvation in no one else; for there is no other name under heaven that has been given among men by which we must be saved.
Acts 4:12

So how is it that a man who is supposed to be the ‘representative of GOD on earth’ (his position, NOT mine) would completely fly in the face of the Scripture he supposedly is here to represent?  Does this not add yet one more item of evidence that the Roman Catholic Church is a perversion of the Church that Jesus established here on earth with Peter as the cornerstone?  The Catholics claim Peter as the first Pope yet the current Pope speaks against Peter in this video message.

This embrace of a one world religion couples nicely with the one world government and one world currency plans.

Be aware and be vigilant. The powers of this earth are moving and leading us as sheep to the slaughter.  We have been asleep for many decades.  We’ve been lost in movies, reality TV, tabloids, football, and the Internet.  Stupefied by technology and entertainment.  It’s time to wake up.  This is not your father’s United States.  Not you great grandfather’s.  We need to stop allowing the government controlled media to lead us blindly.  The truth is out there but don’t expect the government controlled agencies to lead you to it.  Wake up and become engaged in the real world around you as the founding fathers did.  It’s time.  The coffee break is over.

Ed. Note: Some time in the future we’ll begin a series of discussions on the Roman Catholic Church and the litany of perversions it thrusts upon the masses.