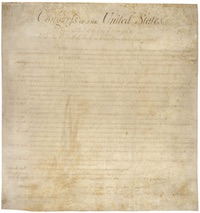 I realize this at first won’t be popular, but petitioning the U.S. Federal Government to craft and adopt an Internet Bill of Rights (#IBOR) is a VERY BAD idea.  We already have a Bill of Rights in the U.S. and within it, in the First Amendment, our right to free expression be it spoken or in print is already protected.  Many argue this doesn’t extend to print word on the Internet, but they are wrong.  So why are we then seeing so much censorship online without any reprimand from the government?

Let’s dig into that.

For the record, I’m NOT an attorney or Constitutional scholar.  I’m just a guy who can read and reason through things, somewhat reasonably well.  My political views also lean towards Constitutional conservatism.

The First Amendment of the Bill of Rights reads as follows:

Congress shall make no law respecting an establishment of religion, or prohibiting the free exercise thereof; or abridging the freedom of speech, or of the press; or the right of the people peaceably to assemble, and to petition the government for a redress of grievances.

Technically speaking this is the third article as you can see on this image.

The first thing we need to take note of is “Congress shall make no law…”.  With regards to Internet censorship, the entities that are perpetuating this censorship are not, and have no official connection with, Congress.  No law has been enacted which demands this censorship.  Congress has had nothing to do with it, at least as a body taking an official action.

Internet censorship is presently at the hands of privately held corporations.

So far, none of these corporations have, by Congress or any other Federal Governmental agency, been declared to be a public utility.  For this reason they are not required to deliver equal service to all citizens.  They retain the right of any corporation to manage their business and services in what ever manner they choose.  Another example of this are television news programs and newspapers.  Each are private corporations and each have the right, because so far it’s not been restricted by Congress, to publish what ever views they wish.  Internet ‘social media’ web sites are no different.

Using television news programs and stations as an example, when any given network narrows it’s view or chooses to focus on a particular political ideology, viewers have the option to switch to a different network which espouses their own views, or to simply turn off the television.  Fox News, which is a relatively new network, sprang from the dissatisfaction of conservatives with the other networks.  This is what private business does.  When there is a need or demand, a new business enterprise will eventually emerge to fill that need or demand.  This requires no legislating on the part of Congress.  It’s called a free market.

In a free market an Internet based corporation, or any other for that matter, can tailor what they choose to publish based on their own values, or those of the audience they elect to reach.  That applies to both liberals and conservatives.

The last thing we should want, the last thing we need, is Congress getting into the act in a lame attempt to amend the First Amendment by trying to pinpoint and restrict certain types of free speech, or the freedom to conduct your business the way you want to, on the Internet.  That is NOT freedom.  That is the type of fascism liberals are all squealing about and making false accusations of now.  The call for an Internet Bill of Rights is nothing more than a move to make censorship a legal requirement.  Do not believe this or buy into it.

We still, sort of, have freedom now.  Additional legislation can never expand freedom, but will only serve to restrict it.

The answer for all of those who are not happy with the current trend in censorship is to, drumroll please, build your own social media platforms that either won’t censor anything or anyone, or would only serve the political ideology you prefer.  As long as we do NOT have legislation in place to control what can or can’t be voiced online, we have the option to create our own networks to represent anything we want, and to the exclusion of what we don’t want.

So when you hear cries demanding an Internet Bill of Rights, you should begin to question the motives behind the voices.  Not join the chorus asking for more of our liberties to be removed.

I welcome well thought out rebuttals.  Whining, bloviating, insults, and ranting without a logical basis or conclusion, will be censored.